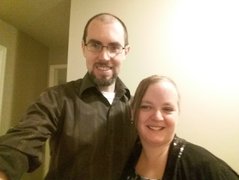 Pastor Paul Welch
Paul is our lead pastor with a heart for God and for people.  If you ever need help, have a tough Bible question, need advice, or just need someone to talk to, he is more than willing to help.  He and his wife Stephanie both grew up in Michigan.  Paul comes from a family of seven children while Stephanie is an only child.  They have been happily married since July 2009.  He earned his degree in Biblical Studies from Rochester College in 2011 while working full time.  He started out doing volunteer work preaching and teaching in a church plant in Marine City, Michigan before eventually coming to Grace.  Paul enjoys reading, bike riding, video games and collects old coins.
graceccpaul@comcast.net

Dick Sievers - Elder
Dick has followed a calling by working as a pastor for many years.  He has worked as a chef at the same time and is still a very good cook.  Now he works as a chaplain at the Allen County Jail where he helps lead inmates to Christ and facilitate religious services.  He has a real passion for bringing people to Christ.  He and his wife Cheryleen have been married for 54 years, have 4 children, 14 grandchildren, and 12 great grandchildren.  In his free time, he enjoys riding his motorcycle along with one of his sons.

Lee Colglazier - Elder
​​Lee and his wife Anah met in the late 1940's in church and were married in 1952.  They have seven children, and have many grandchildren and great grandchildren.  Lee was is a veteran who was in the U.S. Army and currently own's and runs Lee's Outdoor Power, a store in New Haven.  He teaches our Sunday Bible Study class and preaches at Bethlehem Woods Nursing and Rehabilitation.  He is one of the hardest working and encouraging people you will ever meet.